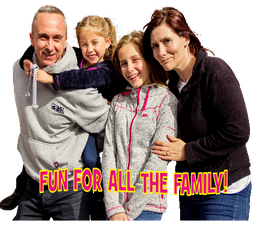 Warwick Mop Fair began when King Edward III granted a legal charter that it be held in the town centre, at a time when the stone version of the castle was being built and before Lord Leycester was even born let alone building hospitals. Many significant towns in the area have similar charters including Stratford upon Avon, Southam, Banbury, Tewksbury, Alcester, Evesham, Abingdon and so on. Each year these towns have fairground attractions in their town centres and surrounding streets.

Warwick Mop is held every year on the Friday and Saturday following the 12th day of October, with the ‘Runaway Mop’ held the following Friday and Saturday. The 12th is the date for calculating when many of the local mop fairs happen. It is believed to be linked to a date the harvesting was completed, in olden days. Stratford’s Mop is held on the 12th, Southam the Monday after the 12th and so on.

When the Mop first started nearly seven hundred years ago the event was a hiring fair for local labourers and employers to meet in a social setting. Workers would be hired for a trial period of a week; hence the Runaway Mop the following weekend allowing either party to back out if they were unhappy with the arrangement. Once the formalities were over, the labourers could spend their token wage (given by the new employers) at the stalls gathered for the occasion or the local pubs!

The title ‘Mop’ has been a subject of debate by historians for a number of years. The most likely link is that labourers wore a symbol (a badge almost) to identify their trade. This meant employers would instantly recognise those wanting work in their industry. These symbols were believed to have been known as mops.

The pig roast, or ox roast as it used to be, provided food for the visiting crowds and a nice fire to warm by on a cold winter’s evening. Today the pig roast remains and is one of a number of ways the Mop fairs raise money for the Mayor’s charity. The first slice of meat is auctioned, Councillors, Showmen and residents of Warwick bid on the meat, which is often re-auctioned a number of times to increase the charity donation made. Then the rest is sold in batches with apple sauce and crackling, great!

As the industrial revolution came along rides became a feature of the Mops around the Midlands. From primitive beginnings peddled by the riders themselves, to steam-powered, electrically-lit roundabouts and on to the high tech, state of the art rides of today. One of the Mop’s unique features is how it constantly adapts in line with modern life yet still retains the traditional value of entertainment for the whole family, from children to grand parents.

The Town Mayor officially opens the Mop at 12 noon on the first Saturday supported by the Town Crier and representatives of the council in their traditional attire. The Mop Charter is read aloud and then the mayor takes a tour of the fair granting free rides to anyone present at the time. Why don’t you come along and see the opening this year?

Warwick Mop is arguably the town's oldest tradition pre-dating even the Saturday market and centuries before the Victorian Evening and Warwick Folk Festival. Over the years it has brought joy and amusement to thousands of Warwick residents and many from further afield. Local shops used to stay open into the evening and hold special Mop promotions to cash in on the extra customers the event attracted. The Mop is an event that can be enjoyed by all ages from young children getting their first glimpse of a fairground, to the grandparents still eating the candy floss!

Why not make this year’s Mop the one for your family to enjoy Warwick’s heritage and take advantage of all the hard work involved in organising this event.  As an extra incentive why not pick up some of the money off vouchers from local shops displaying one of our posters?